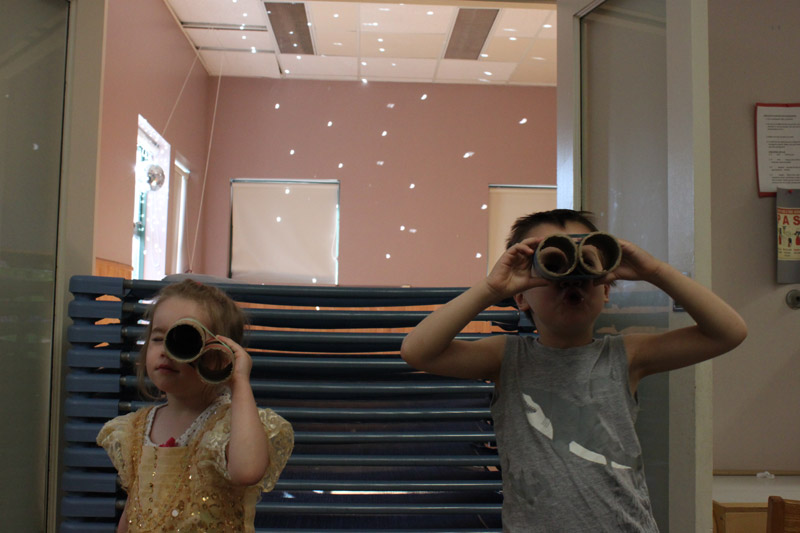 For the first time in 99 years, a full solar eclipse was visible across the entire contintental United States. Vancouver’s H.R. MacMillan Space Centre offered a front-row seat to the viewing, and we’ve also found inventive ways of bringing the planetarium to our House.

Lakshmi Ranasinghe created a day care disco, setting up a disco ball so the children could safely watch reflections of the eclipsed sun shining on the walls. Our youngest astronomers peered at the reflections through cardboard binoculars as they learned about this once-in-a-lifetime event.

Outside, Phil Belanger showed Lee Joseph and Sally Charlie how to use a pinhole camera to observe the reflection of a sun that was 86 per cent obscured by the moon. This simple technology, also called a camera obscura, has been used by humans since 30,000 BCE. Many staff members and participants gathered outdoors to join the fun and witness this astronomical phenomenon.

Folks of all ages shared stories recalling times they’d witnessed solar eclipses in different parts of the world when they were younger. Shirley Francisco was in grade one in the Phillipines when she first saw a full solar eclipse, reflected on the surface of a bucket of water. At Mount Pleasant Neighbourhood House today, people used their cell phone cameras to take unique photos of the eerie light. Sharing this magical scientific experience left everyone feeling inspired and ready to face a sunny day after spending the morning in shadow.